Annie Powell was just 16 when she had several moles removed on her body as a precautionary measure. A few years later, at 20, Powell was diagnosed with the deadliest type of skin cancer, a malignant melanoma and had it removed from her back by her dermatologist. Powell was lucky. Caught early, she was able to beat a fatal disease.

Melanoma accounts for less than one percent of skin cancer cases, but it also causes the vast majority of skin cancer deaths. It’s also not uncommon for people who have had melanoma to develop another melanoma. And unfortunately for Powell, that would be the case.

More than five years later, at the age of 26, Powell believed she was free and clear of 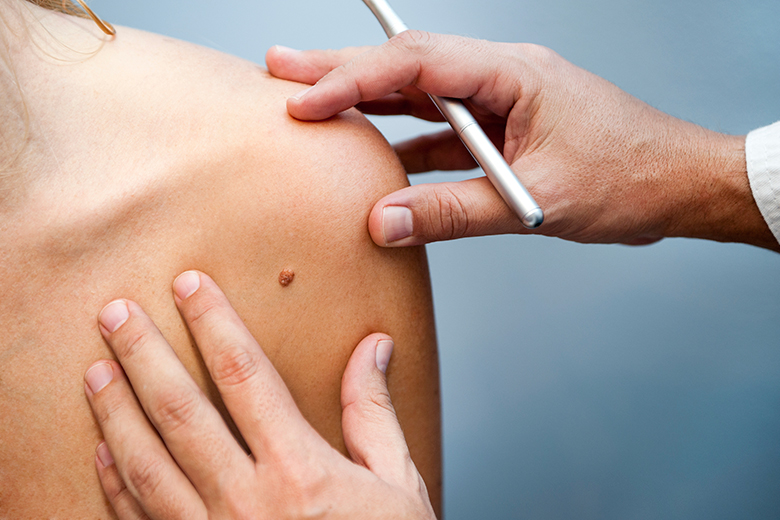 melanoma and began studying massage therapy at the Connecticut Center for Massage Therapy. Her instructor, Scott Raymond noticed a suspicious mole on Powell’s back during a massage and brought the mole to Powell’s attention. Powell followed up with her dermatologist and was diagnosed with Stage III malignant melanoma. The melanoma had been close to Powell’s vital organs and left unnoticed, could have been fatal.

“Scott saved my life,” says Powell. “It made me realize that non-medical professionals, like licensed massage therapists (LMT), can and should assist in skin cancer detection.”

As an LMT and cancer survivor, Powell found herself in a unique position to advocate for and to aid in the early detection of skin cancer. Together, she and Raymond formed the World Skin Project and the two have made it their mission to educate massage therapists and body-workers on detecting skin cancer and informing clients of suspicious lesions.

Powell believes that massage therapists have a responsibility to their client’s skin. A massage therapist is often one of the few people who sees and touches nearly every part of a person’s body.

Powell is not alone in believing that massage therapists have a responsibility to their client’s skin. A study lead by Shannon M. Campbell called, “Skin Cancer Education among Massage Therapists: A Survey at the 2010 Meeting of the American Massage Therapy Association,” found that a significant number of massage therapists surveyed reported examining their client’s skin and recommending at least one client see a dermatologist for a suspicious mole in the past year.

While the majority of massage therapy programs do offer some education on skin pathology, Powell found that some therapists didn’t know how to handle telling their client about a suspicious mole.

“I found that some therapists were simply ignoring suspicious spots, or they would be overly aggressive and stop the massage to inform their client,” adds Powell.

As important as early detection of skin cancer is, prevention is equally critical. No one is immune from skin cancer, even people with darker skin. The American Cancer Society advocates the following sun safety tips:

“If you see a suspicious mole, please see a board-certified dermatologist,” adds Powell. “I’ve been misdiagnosed by a general practitioner in the past.”

Dermatologists recommend a skin check once a year. If individuals are at high risk for skin cancer, they should see their doctor, who will recommend how often their skin should be checked by a dermatologist.