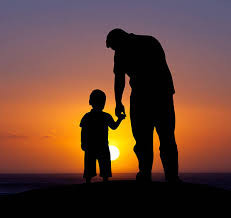 The role of a father has changed over time. Previous generations, a father may not have taken on certain duties that were traditionally always viewed as mother's responsibilities. But today, that is not the case. A father now shares in the day to day caretaking and logistics of raising a child. But this is not the most important role a father has.

Becoming a father involves not only the responsibility of providing for his children, but also becoming a positive role model - teaching children to do better, that it's ok to make mistakes, but to learn from them, to never give up, and to always do the right thing, even when it's the harder thing to do. Children learn from observing the behavior of the adults in their lives, and in particular, a fathers' behavior towards others, and actions, have a significant effect on them, on how they perceive the world, and their own behavior and actions as they grow into adulthood.

With recent events at schools throughout the country, it has become apparent that many children are growing up without a father figure in their lives. This needs to change. A father figure taking an interest in the life of a young child can have a large positive impact on the child, and can change the direction of the child's life.

To all the wonderful fathers and father figures, a commendation to you, for your effort and time spent with the children around you, to mold them into fine and loving adults.