In accordance with the new restrictions effective Tuesday, November 17, we remain open on our normal schedule.  No changes were made to our industry as massage therapy has not been shown to be a vector for spreading the virus.

We continue to follow our careful protocols.  We thank our clients for wearing masks at all times in our studio, and look forward to helping you manage stress and pain, the Elements Way.

Cupping: What Are Those Spots?! 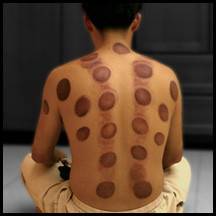 Cupping: What Are Those Spots?!

In 2004, Gwyneth Paltrow graced the premiere of “Anchorman” sporting a simple black dress, and another fashion statement…

In 2016, Michael Phelps & fellow Olympians showed off their muscles at Rio De Janeiro, along with some peculiar markings…

Everyone asked, “What are those marks? Did you get attacked by The Kraken?” These celebrities would smile, and say “No, it’s from Cupping!” Thus, the popularity of Cupping in western society grew. But not everyone knows exactly what it is, or what those purple bruise-like markings actually are.

While Cupping’s origin is still unknown, many give credit to Ancient Chinese Medicine. However, some pictorial records of Cupping have been dated back to the ancient Egyptians around 1500 B.C. Today, it is primarily used in Acupuncture practices where the cups are used to help ease ailments such as Vertigo, Colds & Flus, Headaches, Arthritis and even Liver Disorders. In the massage industry, LMP’s are adapting these traditions for a more practical approach: Using the cupping method to help release musculoskeletal problems (pain, spasms, cramps, knots, tightness, stiffness, etc.).

So what exactly IS cupping? What does it entail?

There are several different types of cups, most common being glass jars that are held over a flame to remove the oxygen, and then placed on the skin to create a vacuum and pull the tissue upwards. Another form (used here at Elements Alderwood) is a silicone cup, that is placed on the skin, pushed downwards and then released to create suction. The cup can then be left stationary, or pulled across the tissue in gentle gliding motions. This allows the tissue to be pulled upwards creating “negative pressure” as opposed to the pushing down (“direct pressure”) technique used in regular massage. It’s another technique we therapists are using to help our clients release tense & sore muscles!

And yes, there can OCCASIONALLY be a pink/purple spot or two left on the skin afterwards. THESE ARE NOT BRUISES!

Bruises happen when trauma to a vein cases blood to seep into the surrounding tissue, creating discoloration and tenderness with touch. While cupping marks look like bruises, they do not feel like bruises and many do not feel them at all. With regular massage techniques (deep tissue, trigger point therapy, etc.), a muscle relaxes & releases old debris that has been trapped in the tissue (lactic acid, metabolic waste, etc.). It is then transferred into the Lymphatic System where it can be cycled out of the body. Cupping Massage also releases these toxins from the tissue, but instead brings it up just under the skin where it can also be filtered out in a natural process. The more debris in the tissue, the more color the Cupping will reveal. The marks can last anywhere up to 3-4 days, depending on the amount of debris pulled out of the tissue. Some recipients do not mark at all, and it’s usually not as common when used in a massage application. While some may feel sore or mildly achey after a session, it’s only due to the soft tissues being released (similar to the effects of a Deep Tissue massage).

Is cupping good for me?

Just as any other massage modality, there are some scenarios where cupping may not be a safe option for you. Contraindications for Cupping Massage are as follows:

-Hernia (OK in areas not affected)

So whether you’re a starlet, an athlete, or just an average joe, cupping is a phenomenal way to release stubborn muscles and get you out of pain! If you like massage, you’ll LOVE cupping!! :)